The ”TOP SECRET!” cycle of works was created by visual artist Daniel Pešta for the European Cultural Centre as a part of the Personal Structures project on the occasion of the 58th International Art Biennale in Venice.

In the separate exhibition hall on the first floor of the historical Palazzo Mora building will be presented a collection of works by Daniel Pešta which consists of three assemblages – Birth, Memento, Hope (Zrození, Memento, Naděje) and one videoart – The Chain (Řetěz).

The only timeless suffering is the pain of the mother during childbirth. The vital presence of woman is symbolically represented in this work by a white chemise, a fetish of innocence for some.  The torso is a performance challenge, the most powerful energetic act of the bearer of life who, in the pain-ridden moments undergoes her genetically given destiny, lifts herself into a vertical position in order to take a breath and fulfil her archaic challenge and assume responsibility for all human generations.  At the same time she is uplifted, because her power of decision always raises her up again, so as to watch over the lives of her nearest and dearest with a clear insight. We think too little about the fates of women, whose tears often transform themselves into blood, this life-giving fluid which here is perceived as a sacrificial bath for all that is lost, a levy on all enjoyed pleasure, but also redemption and liberation.

The fragmented body in its wounded form represents a challenge.  At the same time it distances itself from our need for harmony and a sense of security.  It provokes a society longing for perfectionism and aesthetics, it holds attention with its suggestive vulnerability.   It permits the symbols of pain, suffering and death, while at the same time connecting all that is organic and biological.  The anatomical and material structures blend into one, blood in this case acts like a delightful, dynamic and healing relief.

Whether we like it or not, each one of us must be subjected to some kind of moral judgement or conscience during our lifetime and it is important to realise that a personal search for values should be taking place on a permanent basis, otherwise we succumb to ambivalent stagnation without any fundamental limits.  The genetic structure of the human race is, in certain situations, adapted in an absurd manner.  In existential moments of our life, on the brink of the abyss, we often feel hope is lost and by way of contrast the most beautiful visions awaken fears of the apocalypse or an undeserved paradise. “That is also why, on the shore of ecologically endangered Venice, I have deliberately and systematically been searching for old wooden debris, resembling organ structures, separating the pieces from each other like limbs, having sawn some of them off and tied them into one bundle with the halved body of Christ made of ivory“, says the artist.

This “bleeding” sculpture is a reminder of the fleetingness of all that is living, and also of all suffering.  We will all fuse with nature, the imaginary forms of the remnants of our bodies and the bodies of those who suffered for us will be rounded out in regular waves of the sea‘s tidal flow in an eternal universe.

The oft-quoted sentence, that everything is related to everything, is ambivalent in content and its positive connotations can also be assigned to many other useful disciplines such as science, art, philosophy or inter-personal relationships.  There are also, however, many meanings in the negative sense of this phrase and I have therefore tried to point out some of them in this video.

The Chain (Řetěz) deals with the peculiar practices of secret societies, totalitarian conspiracies, religious or power groupings, and points out not only the aggressiveness of the “so-called” leaders, their superiority and manipulation, but bears witness also to the fear of those who are intrigued by narcisistically disturbed individuals.  It reveals their servility, weakness and desire to allow themselves to be controlled, testifies as to how far a person is prepared to go in pursuit of his own humiliation or self-destruction and to where indeed do the frontiers of fanatical tendencies lie?

In a deserted, bleak and gloomy factory hall an imaginary secret society sits around a wooden table.  It is precisely at tables such as this that the fate of groups, individuals or nations is decided.  Here allegiance to a common cause is being sworn,  terrorist activity planned, and from here a “higher” goal is being looked up to, or even the course of history determined. At tables which would be better suited to being symbols of solidarity, calm and security. It is up to each one of us to see how capable are we of evaluating what manipulation is admissible in the name of good and what is not. The possibilities are many, the interpretations numerous, the conclusions limited.

The dramatic concept of the projection of a twenty-week-old human embryo on a tin warning notice board from a mine field in former Yugoslavia should be the opposite of all suffering, since it is the carrier of human genetic information whilst also being the symbol against the destructive power of all aggressors who threaten our very existence through their tendencies like the accumulation of weapons, modern hybrid wars, or even the perversion of mine fields.

War, as opposed to the light of the foetus projected onto the wartime notice board, like an endless life forcing itself towards the surface of new human generations, as an immortal source of hope, as if the upcoming generations could hope that their time would at last be the right and peaceful one. 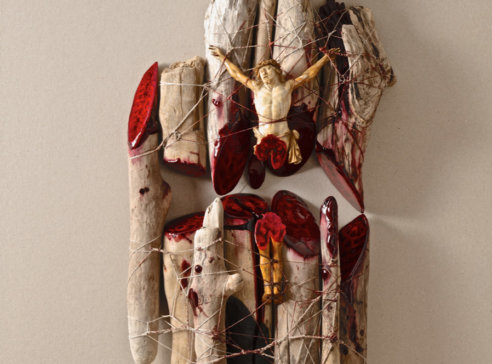 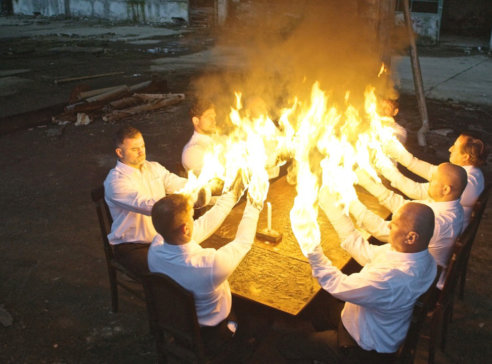 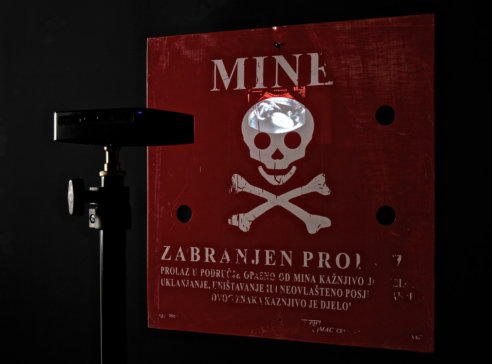 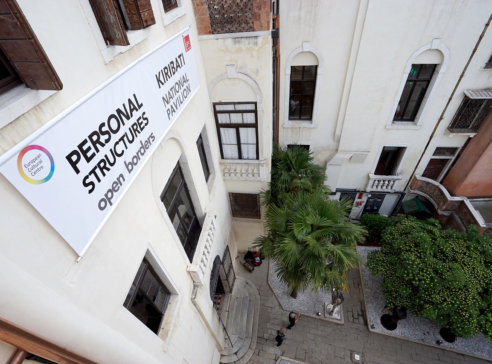